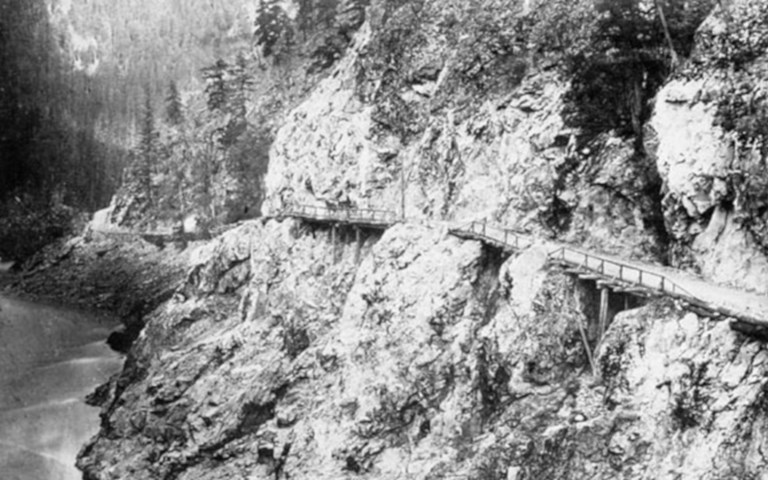 Roughing it in Search of Cariboo Gold

When the Fraser River Gold Rush concluded in 1859, gold seekers pushed farther into British Columbia’s interior to seek their fortune. With so much wealth discovered on the banks of the Fraser River, prospectors who ventured north stuck to the rivers and creeks that flowed into it, discovering minor but promising surface deposits along the way. Then in 1860, a major deposit was found at the junction between the Fraser and Quesnel rivers, fuelling the frenzy of the Cariboo Gold Rush.

Led by an American lawyer named William Ross “Doc” Keithley, a party of four went up to Quesnel River and found a deposit that was substantial enough to fund the development of a town called Keithley Creek. They continued north into Antler Creek, a remote location at the centre of the Cariboo region, where they found what they were looking for: the richest deposit discovered in the province up to that point. Their findings included placer gold deposits worth up to $100 per pan, which would be the equivalent of just over $3,000 today.

Despite trying to remain vague when asked about their find, the group was followed back to the site, and by the spring of 1861, 1,200 miners had staked claims at Antler Creek. Newspapers back east published reports of the wealth men were pulling from the earth and the luxurious lifestyles they were able to afford. What newspapers failed to mention was the tremendous challenge that operating in the Cariboo region presented.

The colony was, at the time, the epitome of frontier living, with very little development beyond Victoria and New Westminster, and just getting to the Cariboo was incredibly dangerous. Provisions were nearly impossible to obtain en route, and the lack of proper roads meant prospectors had to fight their way through snow drifts in the winter and thick brush during the summer. One Welsh immigrant who made the trek in 1862 with a group of fellow prospectors noted that half of his group had to turn back because they ran out of money. Simply arriving at the mining camp, however, was not enough to guarantee the gold seekers their fortune.

To recover the gold, miners had to build makeshift equipment on the spot. Those who staked claims that required complex machinery often spent more money trying to establish operations than they earned.

The first of two major discoveries in 1862 came when the Billy Barker Company, led by an English seaman and saved from impending ruin by a last minute loan, sunk a shaft 52 feet below a well-explored canyon in Williams Creek and struck gold. The mine was worked for $600,000 overall and led to the establishment of Barkerville, the largest town developed from the gold rush. The second major find came from Canadian John “Cariboo” Cameron, who staked a claim with business partners one mile down the creek from Barker’s and struck a deposit called the Cameron Claim, which earned him a share of $350,000 (well over $5 million in today’s dollars) within a year.

With seemingly endless riches to be found, the government wanted to improve access to the area to support further discoveries. In 1861, Governor James Douglas concluded that investment in a wagon-bearing road to the Cariboo was needed. The project was ambitious for the time and is still considered a feat of engineering to this day. Extensive cribbing, heavy blasting and bridge-building were required to navigate steep canyons and rushing rivers. The road was completed in 1864, but by this time mining activity in the area was slowing. The majority of mining was done in the first five years of the rush, but some activity continued until 1900. In Williams Creek, Stout’s Gulch and Conklin, an estimated $30 million worth of gold was mined between 1861 and 1898 (more than $500 million in today’s dollars).

The road came in too late for the colony’s mining efforts, but it was not all for nothing. Instead of returning home, many miners chose to settle in British Columbia. The completion of the new road made it possible for businesses to grow, and development in cattle ranching, forestry, real estate and fisheries followed. The road may not have served its primary function of supporting the gold rush, but it built the foundation for future economic success in British Columbia.