Diving into the Night

My sister, Sarah, has always been competitive. It’s tough growing up with four younger siblings, and especially tough when one of those siblings is an adrenaline junkie. So when we heard of night diving in Koh Tao before our trip to Thailand, it was only a matter of time before one of us suggested it, silently hoping the other would decline.

This is how we ended up boarding a boat at dusk, afraid of the dark, and afraid of the ocean. Our collection of Discovery Channel’s Shark Week instilled terror in addition to the mantra: “act like prey, become prey”. That being said, there is no thrill quite like the moment you overcome a fear.

So there we were, geared up at the Red Rock dive site, walking the plank. Our guide, Jack, gave me the signal to jump in three times before I complied. The cold water jolted me, and, as with every previous dive, salt water managed to invade my tightly pinched nose. After inflating my BCD (Buoyancy Control Device), I leaned back and bobbed over the black waves. Stars lit up the dark sky. 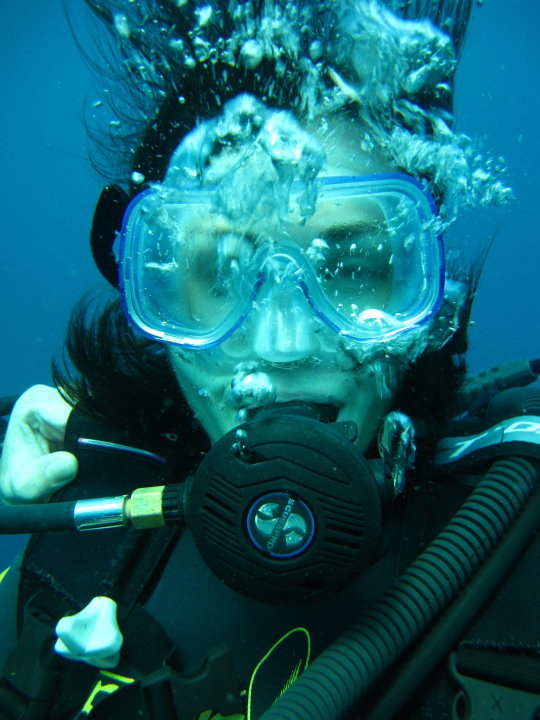 Once Sarah jumped in, we engaged in our customary “Who can hold their breath longer?” match. I dipped beneath the surface and opened my eyes, but the harsh salt forced them shut. When I felt the internal kicking of a lack of oxygen, I popped my head out of the water: Sarah was still below the surface. I considered dropping back under, but she popped up at that exact moment. Defeated, I admired her ability to portray a look of superiority amidst gasping for air.

When she caught her breath, Jack asked if we were ready. Together, we raised the BCD hoses and deflated, slowly sinking under the ocean waves.

Under water, the darkness beyond my beam of light triggered my sinister imagination. I sucked up far more air than necessary on the way down. My flashlight jerked around in a million directions at once as I desperately tried to uncover any predators looking for a midnight snack.

My anxiety diminished when my fins touched the safe, sandy bottom. The weightlessness made me feel like Neil Armstrong conquering the moon. As I stood there surveying my surroundings with a puffed-out chest, a big, slack-jawed fish floated over a coral reef. I remember thinking, Oh, what is this moon creature coming to welcome me? Before I could even attempt a peaceful introduction, it darted towards me. I jolted and kicked, but it tried grabbing my fins with its little buck teeth. Jack swam towards me and kicked harder before signalling that it was a triggerfish. The grumpy thing let off, but glared at us as we swam away.

The three of us swam into a rock tunnel so narrow that turning around presented a challenge. The tunnel eventually led to a cavern, and a sigh of relief escaped my regulator. At this point, Jack motioned us to turn off our flashlights, so one by one, we extinguished our sight.

My eyes kept blinking, unable to differentiate between being open and closed. Memories of playing hide-and-seek in the dark flashed through my mind as my arms stretched out in front of me, feeling for anything. A tiny, glowing ember caught my peripheral vision. Two more lit up and glowed green against the opaque backdrop. I hovered and stretched out, reaching for these incandescent specks. More and more lit up, and suddenly a tornado of lights engulfed me. Bioluminescent plankton filled the cave.

Jack’s flashlight eventually ended our underwater light show. We swam back through the tunnel, and, just at the entrance, a moray eel poked its head above coral. My light didn’t seem to bother it, so I approached, fascinated. Its purplish sock of a body lay tucked under a crevice. I turned around to get the others’ attention, but darkness surrounded me. Not even a hint of light indicated their whereabouts. I paddled out, thinking that they couldn’t have gone far.

After a quick and fruitless search, I started my slow ascent. When I reached the top, the boat glinted about 500 metres away.

Half a kilometre of surface-swimming frightened me more than being underwater: when below the water with a decent flashlight, you can at least see if you’re swimming towards a shark. The fear of flailing my limbs through the murky distance paralyzed me, but there was one fear that scared me more: abandonment in the ocean. I reluctantly started kicking and pushing through the black waves. Making it back to the boat, unharmed, reminded me that reality is rarely as dangerous as my imagination.

When I reached for the ladder, I looked up and saw that my sister had beat me to the boat.

As published by Vagabundo Magazine.